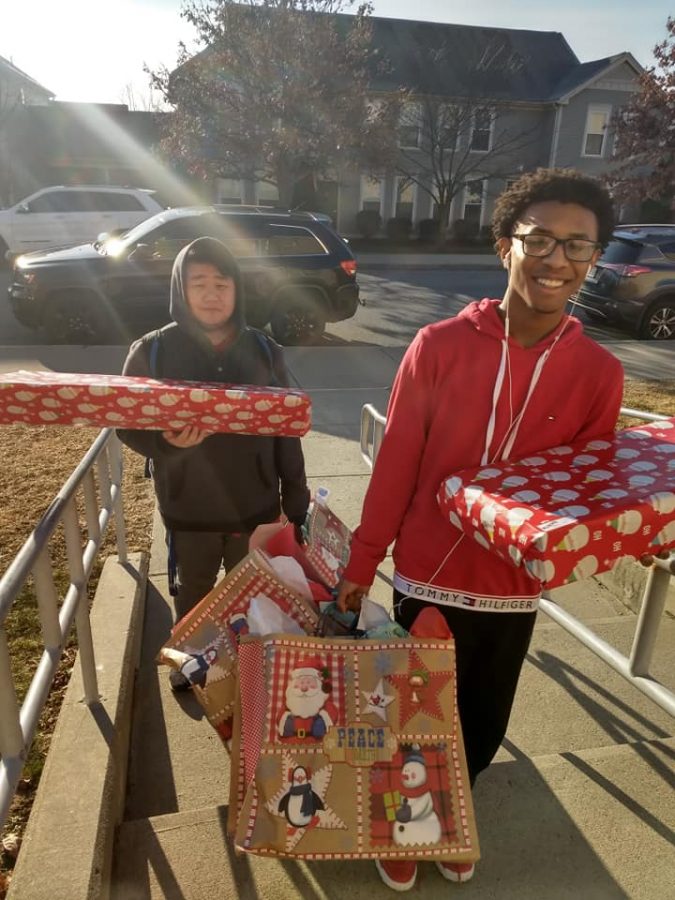 On 12/9/19 the Juanita Sanchez Educational Complex was part of a huge toy drive which brought dozens & dozens of presents to our JSEC  special needs students.  The toy drive is an annual event where a community organizer, Michael Slade, uses his birthday, to collect gifts for children in Providence.   Michael asks family, friends, and patrons from the Dark Lady and the Alley Cat, a local dance club located downtown,  to donate toys for this drive.  The fact that its his birthday and that he uses his birthday to collect gifts for others is a story within itself; and shows how just one person can pay it forward and reach hundreds of Providence kids.   The event has grown exponentially over the years.  When asked why he does this Michael stated “there was no greater joy than to see kids receive gifts during the Christmas Season and I’m lucky enough to be able to use my birthday and a place where I work to do this”.

Michael has a soft spot for Providence children and families.   The toy drive served several schools and community organizations in the past and when Mr. Moreau requested that JSEC be considered to be added to the list Michael asked what type of students were in need.  Once  information was shared with  Michael, he immediately and enthusiastically added JSEC onto their list.   Some of the other schools and agencies include but were not limited to:

We are estimating that this  Toy Drive benefited well over 75 families and over 200 individual children.  It is also estimate that the Toy Drive brought in over 1250 toys this year which was an all time record.  “Each year just when we think well never outdo the year before we end up doing it, were so proud to all who donated.”-Michael Slade.  The toys were distributed in many ways and was methodically done.  Some schools gave the toys away via a pre-determined needs list where parents were called in to pick up a specific bag of toys which met the needs of their children.  Others schools wrapped the gifts themselves and distributed them to students.   Here at JSEC we even used Santa Clause to come in and distribute some of the toys to the students.    Also at JSEC, Ms. Zolli, Ms. Medina, Ms. Kibarian, and Mr. Moreau teamed up to create a master wish list for each of their students which fulfilled through this over the top toy drive!

The process of gift distribution went as follows:

*Determine the type of toys/games for each student

*Gift Wrapping Nights with labels attached to each gift

*Giveaway in classrooms, with families, with Santa, and during Holiday Celebrations throughout week

On Thursday, Dec 21st, 2018, after wrapping each and every gift that was to be distributed to JSEC Special needs students, the gifts were brought to JSEC.  We had our two of our Seniors, Xavier Marmol, and  Kevin Xiong, assist with delivery of the gifts Santa and to designated rooms whose students were on that ‘wish list’.

When they say “A photo is worth a thousand words” we would say that that is an understatement when looking at the photos from the Toy Distribution Day and the many events associated with it.  The photos taken express happiness, joy, excitement, along with including tears associated with teachers being estatic  knowing the children they teach everyday would indeed have a very happy holiday season.

We think its fair to say Ms. Molina, JSEC’s Kindness Coodinator,  would be proud with the kindness that took place, outside of our building and into our school.

We must especially once again thank:  Randy Diantuono and Buck Asprinio, owners of the Dark Lady & Alley Cat, Donna Asprinio, Jeanne D’Agostino event co-organizers, and of course Michael Slade.   Many say Christmas comes from a store but this entire event shows it came from a whole lot more!