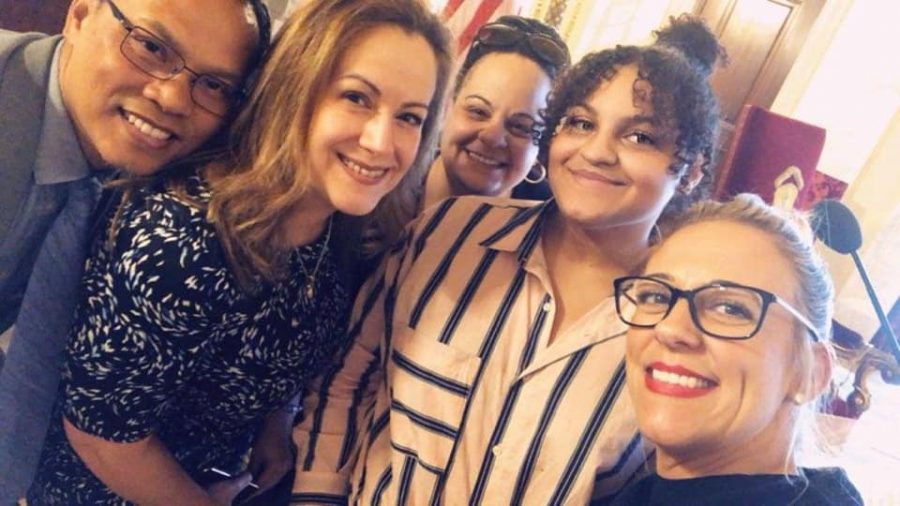 The JSEC student body is so proud of JSEC student Samantha Kelly, who has proven to be a true advocate for mental health in Rhode Island.  On Thursday, September 25th, 2019, Mr. Or, Ms. Testa, Ms. Pinto and Ms. Molina along with the key note speaker of the event, Samantha Kelly took on the State House in hopes to showcase the importance of addressing mental health issues facing teens each and every day.

The Providence Journal wrote a story about the press conference they had regarding mental health so we thought it vital that we share their story to help others in our community because the stigma associated with mental health.   It is also important that teens know there is a lot of information and assistance out there for those who may be going through their own issues or for those who may be able to help others who are going through a tough time.   We know that being a teenager may be the toughest part of life, so any and all information disseminated may serve as a catalyst for all to get help.  Recognizing and addressing these issues head on is key to getting through them. 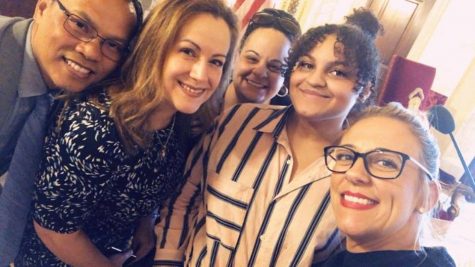 The Newspaper Staff normally just writes articles and reports the news, but this story has been written by the Providence Journal so it has done our job for us this time around.  Special thanks to G. Wayne Miller who is a staff journalist there and to Kris Craig who put this story together.  We are proud of all the great things Ms. Molina and the Kindness Crew has done this year along with students such as Samantha Kelly who is a true advocate for teens not only in Providence but throughout the State Of Rhode Island.

Juanita Sanchez student Samantha Kelly, left, a member of the school’s “Kindness Crew,” gets a warm hug from her school’s vice principal, Ariana Testa, after Samantha spoke about her family’s experiences dealing with her and her sister’s mental-health issues at a Student Mental Health Awareness rally in the State Room of the State House on Thursday.

And the result is that many vulnerable and largely poor children and adults do not get the help they need to live fulfilled lives, now and in the future.

That was the message regarding mental health in Rhode Island from J. Clement “Bud” Cicilline, president of the Mental Health Association of Rhode Island, to the advocates, providers, government officials, legislators and others who filled the State House’s State Room on the eve of May is Mental Health Month, the annual awareness campaign.

“The current situation is an ungodly mess,” said Cicilline, an uncle of U.S. Rep. David Cicilline and a former state senator who spent almost a half century on the staff of Newport Mental Health, much of it as executive director.

“We are seeing the denial of much-needed services, which actually puts people in danger,” Cicilline said, referencing a Providence Sunday Journal story, first in the “State of Health” series, about the shift of Medicaid funding to managed-care organizations that has created a host of problems affecting thousands, according to advocates.

“We must stand up and we must stand together and cry out in support of the community providers who are essentially carrying out a state mandate that has always been in place, because it has always been state government’s responsibility to take care of the fragile, impaired, needy and sick among us,” Cicilline said.

Cicilline noted Rhode Island’s standing years ago as a national leader in providing community care to people living with mental-health challenges — but said now is the time for action, not nostalgia.

“So we ask you to join us in this campaign for justice for people living with mental illness,” he said, to applause. “We think that this is our duty as human beings!”

Among the initiatives, Coderre said, is an executive order by Raimondo that has the state “focusing on parity,” a federal law requiring insurers to pay for mental-health services, just as they do for medical treatment.

“With your support,” Coderre said, “we were successful in getting legislation passed, developing a report to the governor that identified the gaps in our system and provided a framework to begin filling them, and we had a traveling statewide conversation bringing mental health out of the darkness where it all too often resides.”

The governor, Coderre said, is now “championing an initiative to bring more mental-health services to schools. As many as one in five students will struggle with mental-health issues by the time they graduate. Right now, there just aren’t enough support services easily accessible to help ensure that every child has a shot at a great future. We need to change that.”

Coderre said the governor’s proposed budget includes $590,000 “to fund teacher training for classroom-based mental-health interventions. These trainings will be accessible for all teachers in our state.”

Among the other speakers were Trista Piccola, head of the Department of Children, Youth and Families; Rebecca Boss, who heads the Department of Behavioral Health, Developmental Disabilities and Hospitals; Megan N. Clingham, state mental health advocate; and Noah Pike, a peer recovery specialist with Parent Support Network RI.

The 2019 Mental Health Legislators of the Year Awards were presented to Sen. James A. Seveney, D-Portsmouth, and Rep. Grace Diaz, D-Providence. This year’s Mental Health Hero Award was given to Ruth Feder.

Mental Health Month continues with the “Flip the Script Film Festival” presented by Art to Reduce Mental Health Stigma, Friday from 6:30 to 8:30 p.m., at the Avon Cinema in Providence. For a list of other events into early June, go to: http://bit.ly/2XPvI5B